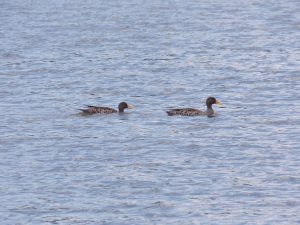 The yellow-billed duck (Anas undulata) is a 51–58 cm long dabbling duck which is an abundant resident breeder in southern and eastern Africa.

This duck is not migratory, but will wander in the dry season to find suitable waters. It is highly gregarious outside the breeding season and forms large flocks.

These are mallard-sized mainly grey ducks with a darker head and bright yellow bill. The wings are whitish below, and from above show a white-bordered green speculum.

Sexes are similar, and juveniles are slightly duller than adults. The north-eastern race is darker and has a brighter bill and blue speculum.

It is a bird of freshwater habitats in fairly open country and feeds by dabbling for plant food mainly in the evening or at night. It nests on the ground in dense vegetation near water. Rarely found in suburban areas, in close proximity to golf courses, parks and lakes or dams. The clutch numbers between six and twelve eggs.

The male has a teal-like whistle, whereas the female has a mallard-like quack.

The yellow-billed duck is one of the species to which the Agreement on the Conservation of African-Eurasian Migratory Waterbirds (AEWA) applies. The southern nominate subspecies is declining due to competition and hybridization with feral mallards (Rhymer 2006).