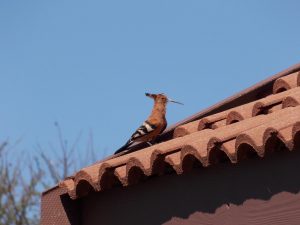 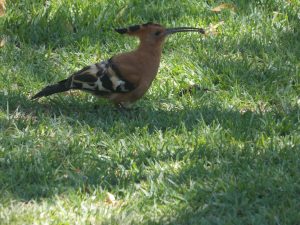 The hoopoe /ˈhuːpuː/ is a colourful bird found across Afro-Eurasia, notable for its distinctive “crown” of feathers. Three living and one extinct species are recognized, though for many years all were lumped as a single species—Upupa epops.

Upupa and epops are respectively the Latin and Ancient Greek names for the hoopoe; both, like the English name, are onomatopoeic forms which imitate the cry of the bird.[1][2] In Ancient Egypt the species was known under two names. The earliest most probably having been *’db3.w’ and/or *’db3.t’) ‘(lit.:)the one who blocks up <its nesthole’>’.

Therefore also the early Egyptian word ‘db<3>.t’ (from which late Egyptian Demotic ‘tby’, Coptic ‘toobe’ and subsequently Arabic ‘(al-)tube’ and French and English ‘adobe’ are derived) meaning sundried brick’ (‘lit.: ‘the one that blocks up <a wall>’) was often written with the ‘hoopoe’-hieroglyph, here used as a phonogram. (See Sir A.H.Gardiner, ‘Egyptian Grammar’, Signlist G22 (hierogyph of) Hoopoe, used as Phonogram: ḏb/ḏbt.)

The hoopoe was classified in the clade Coraciiformes, which also includes kingfishers, bee-eaters, and rollers.[3] A close relationship between the hoopoe and the woodhoopoes is also supported by the shared and unique nature of their stapes.[4] In the Sibley-Ahlquist taxonomy, the hoopoe is separated from the Coraciiformes as a separate order, the Upupiformes. Some authorities place the woodhoopoes in the Upupiformes as well.[5] Now the consensus is that both hoopoe and the wood hoopoes belong with the hornbills in the Bucerotiformes.[6]