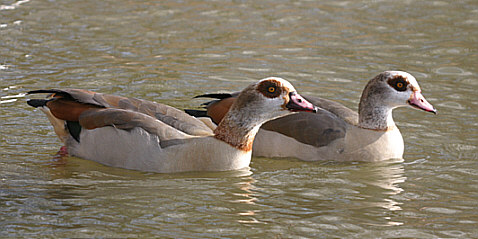 The Egyptian goose (Alopochen aegyptiaca) is a member of the duck, goose, and swan family Anatidae. It is native to Africa south of the Sahara and the Nile Valley.

Egyptian geese were considered sacred by the Ancient Egyptians, and appeared in much of their artwork. They have been raised for food and extensively bred in parts of Africa since they were domesticated by the ancient Egyptians. Because of their popularity chiefly as ornamental bird, escapees are common and small feral populations have become established in Western Europe.

The sexes of this species are identical in plumage but the males average slightly larger. There is a fair amount of variation in plumage tone, with some birds greyer and others browner, but this is not sex- or age-related. A large part of the wings of mature birds is white, but in repose the white is hidden by the wing coverts. When it is aroused, either in alarm or aggression, the white begins to show. In flight or when the wings are fully spread in aggression, the white is conspicuous.[7]

The voices and vocalisations of the sexes differ, the male having a hoarse, subdued duck-like quack which seldom sounds unless it is aroused. The male Egyptian goose attracts its mate with an elaborate, noisy courtship display that includes honking, neck stretching and feather displays.[8] The female has a far noisier raucous quack that frequently sounds in aggression and almost incessantly at the slightest disturbance when tending her young.[