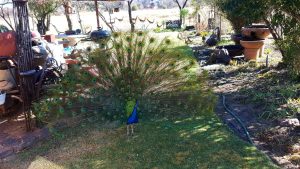 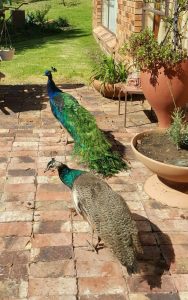 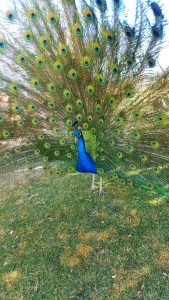 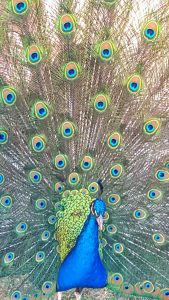 The peafowl include three species of birds in the genera Pavo and Afropavo of the Phasianidae family, the pheasants and their allies. There are two Asiatic species: the blue or Indian peafowl originally of India, Sri Lanka, and Pakistan; and the green peafowl of Myanmar, Indochina, and Java; and one African species, the Congo peafowl, native only to the Congo Basin. Male peafowl are known for their piercing call and their extravagant plumage. The latter is especially prominent in the Asiatic species, who have an eye-spotted “tail” or “train” of covert feathers which they display as part of a courtship ritual. The term peacock is properly reserved for the male; the female is known as a peahen, and the immature offspring are sometimes called peachicks.[1]

The functions of the elaborate iridescent coloration and large “train” of peacocks have been the subject of extensive scientific debate. Charles Darwin suggested they served to attract females, and the showy features of the males had evolved by sexual selection. More recently, Amotz Zahavi proposed in his handicap theory that these features acted as honest signals of the males’ fitness, since less fit males would be disadvantaged by the difficulty of surviving with such large and conspicuous structures.

The Indian peacock has iridescent blue and green plumage. The peacock “tail,” known as a “train,” consists not of tail quill feathers, but highly elongated upper tail coverts. These feathers are marked with eyespots, best seen when a peacock fans his tail. Both sexes of all species have a crest atop the head. The Indian peahen has a mixture of dull grey, brown, and green in her plumage. The female also displays her plumage to ward off female competition or signal danger to her young.

The green peafowl differs from the Indian peafowl in that the male has green and gold plumage and black wings with a sheen of blue. Unlike the Indian peafowl, the green peahen is similar to the male, only having shorter upper tail coverts, a more coppery neck, and overall less iridescence.

The Congo peacock male does not display his covert feathers, but uses his actual tail feathers during courtship displays. These feathers are much shorter than those of the Indian and green species, and the ocelli are much less pronounced. Females of the Indian and African species are dull grey and/or brown.

Chicks of both sexes in all the species are cryptically coloured. They vary between yellow and tawny, usually with patches of darker brown or light tan and “dirty white” ivory.

Occasionally, peafowl appear with white plumage. Although albino peafowl do exist, this is quite rare, and almost all white peafowl are not, in fact, albinos; they have a different condition called leucism, which causes an overall reduction in different types of pigment. This can result in the complete lack of coloration of their plumage, while preserving normal eye colour. By contrast, true albino peafowl have a complete lack of melanin, resulting in the albino’s characteristic red or pink eyes. Leucistic peachicks are born yellow and become fully white as they mature.