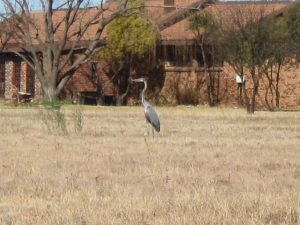 The Goliath heron (Ardea goliath), also known as the giant heron,[2] is a very large wading bird of the heron family, Ardeidae. It is found in sub-Saharan Africa, with smaller numbers in Southwest and South Asia.

This is the world’s largest heron. The height is 120–152 cm (47–60 in), the wingspan is 185–230 cm (73–90.5 in) and the weight is 4–5 kg (8.8–11.0 lb).[3][4] Among standard measurements, the tarsus measures from 21.2 to 25.5 cm (8.3 to 10.0 in) and the wing chord averages around 60.7 cm (23.9 in) in length. The culmen measures from 18 to 20 cm (7.1 to 7.9 in), while the bill from the gape measures around 24 cm (9.4 in).[5] In flight it has a slow and rather ponderous look and, unlike some other herons, its legs are not held horizontally. Male and female look similar, with an overall covering of slate gray and chestnut feathers. The head and its bushy crest, face, back and sides of the neck are chestnut. The chin, throat, foreneck and upper breast are white, with black streaks across the foreneck and upper breast. The lower breast and belly are buff with black streaks. The back and upper wings are slate-grey, with a chestnut shoulder patch at the bend of the wings when they’re closed. The under-wing is pale chestnut. The upper mandible is black and the lores and orbital areas are yellow with a greenish tinge. The eyes are yellow while legs and feet are black. Juveniles look similar to the adults, but are paler. The only heron with somewhat similarly-colorful plumage characteristics, the widespread purple heron, is much smaller than the Goliath. Despite the shared plumage characteristics with the purple species, the closest extant relatives of the Goliath are considered to be the great-billed and the white-bellied herons of Southern Asia. Due to their large size, this species trio is sometimes referred to as the “giant herons”.[6]

The Goliath heron has a distinct deep bark, often described as kowoork, audible from a distances of up to 2 km. A disturbance call (arrk), sharper and higher, can also occasionally be heard. A huh-huh is given during the crouched stage, while a krooo may be heard with the neck extended. Organ-like duetting has been reported at nest sites but has not been confirmed.