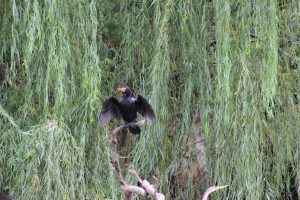 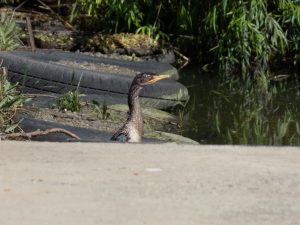 The reed cormorant (Microcarbo africanus), also known as the long-tailed cormorant, is a bird in the cormorant family Phalacrocoracidae. It breeds in much of Africa south of the Sahara, and Madagascar. It is resident but undertakes some seasonal movements.

This is a small cormorant at 50–55 cm length and an 85 cm wingspan. It is mainly black, glossed green, in the breeding season. The wing coverts are silvery. It has a longish tail, a short head crest and a red or yellow face patch. The bill is yellow.

Sexes are similar, but non-breeding adults and juveniles are browner, with a white belly. Some southern races retain the crest all year round.

The reed cormorant can dive to considerable depths, but usually feeds in shallow water. It frequently brings prey to the surface. It takes a wide variety of fish. It prefers small slow-moving fish, and those with long and tapering shapes, such as mormyrids, catfishes, and cichlids. It will less frequently eat soles (which can be important in its diet locally), frogs, aquatic invertebrates, and small birds.

Two to four eggs are laid in a nest in a tree or on the ground, normally hidden from view by long grass.